Today is the last special election of 2018 before the general election. Being an R+7 district, it should be a safely Republican seat, but as has been the case nationwide in other elections, Democrats are more enthusiastic and Democratic candidates are overperforming in districts and states where they haven’t, historically.  This district, which includes many of the state capital’s suburbs, hasn’t elected a Democrat to the House of Representatives since 1980. Donald Trump came to campaign on behalf of Republican Troy Balderson, though Ohio governor John Kasich – a longtime foil and critic – raised questions as to whether the President was invited or if he invited himself.

The final poll of the race before Election Day had Democrat Danny O’Connor up by one point, with seven percent undecided. One finding from this poll to keep an eye on: independents support O’Connor 56-28, a 2-to-1 margin.  O’Connor also leads among voters who are more excited and paying more attention to the election.  If these poll numbers are correct, it means he is surging at just the right time as the race is winding down. However, one caveat worth noting that was first pointed out by NBC’s Alex Seitz-Wald: this poll does not include Green Party candidate Joe Manchik, who got 3.6 percent of the vote in 2016.

Democrat heavy hitters are coming into the district for a last-minute push on O’Connor’s behalf.  Former vice president Joe Biden recorded a robocall, while Alabama senator Doug Jones sent out an email to his supporters urging them to make last-minute donations to the O’Connor campaign.

The  early vote numbers for Democratic-heavy Franklin County are in. Without making any formal conclusions yet until other ballots are counted, the numbers are looking good for O’Connor:

Franklin Co. early vote in #OH12 (can't know what it means yet):

And as if all that isn’t enough to make Election Day interesting, Balderson made what can only be described as a last-minute gaffe that Democrats are aggressively pushing: 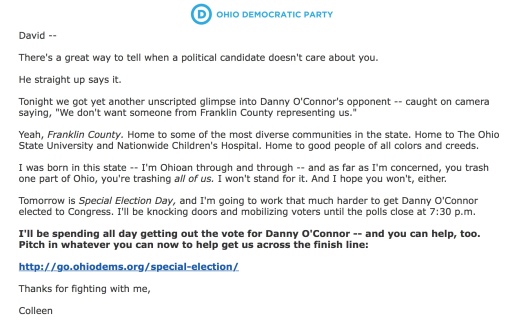 Why does this matter? The district, which is mostly rural, includes a geographically small part of Franklin County – home of the state capital and Ohio State University – within its boundaries, which is the suburbs north of Columbus. According to the Washington Post, “a bit less than a third of the vote” in today’s election is expected to come from Franklin County.

No political strategist in his or her right mind would tell a candidate that writing off or dismissing any part of the district the candidate is seeking to represent, let alone one that could account for as much as one third of potential voters, is a winning message.

Conventional wisdom on this race is that it is unnecessarily close for a historically safe Republican district in congressional and presidential races. If O’Connor wins tonight, it will be considered another sign of a potential blue tsunami on Election Day, in addition to cutting by one the number of seats needed to flip the House of Representatives. If Balderson manages a narrow single-digit victory, Republicans will breathe a sigh of relief while Democrats will feel pretty good for coming close, but it will be another moral victory in a string of special election losses since 2017. (For the record, Democrats have won two out of ten special elections in that period – the two victories being Doug Jones in the Alabama Senate race and Conor Lamb in Pennsylvania’s 18th congressional district)